DOVELION: A Fairy Tale for Our Time
The First Long-Form Novel by Eileen R. Tabios

SPD #7 in Fiction Bestsellers for May and April 2021 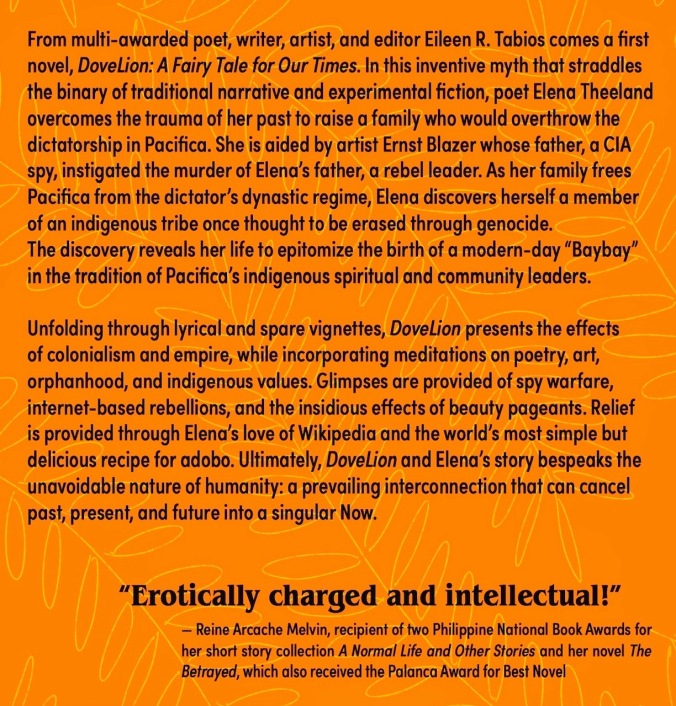 ADVANCE WORDS:
Erotically charged and intellectual, entertaining, always surprising, this virtuoso novel seduces with its layers, its characters, and its wide-ranging reflections on art, poetry, history, politics, and desire. The story circles around Elena, orphaned as a child in (the fictional country of) Pacifica and sent to live in the United States, where, as a young woman, she repeatedly seeks out a stranger for domination/submission encounters. What secrets about her country and herself is she trying to uncover, and how are they linked to Ernst, her nonbinary lover? How does her story — and that of her father, her mother, her daughter and grandsons — reflect and change the history of her homeland? The novel is structured like indigenous myth, where past, present and future do not exist, and where everything is present at once and connected to each other: fairy tales, the struggle against a dictator, poetics, colonialism, motherhood, gender identity, sexual passion, romantic love, and even a recipe for adobo. Eileen R. Tabios uses her pen like Elena uses her whip, provoking tenderness through intense sensation as well as illumination through sensuality and a passionate, hungry mind.
—Reine Arcache Melvin, recipient of two Philippine National Book Awards for her short story collection A Normal Life and Other Stories and her novel The Betrayed, which also received the Palanca Award for Best Novel

Meet Elena Theeland, poet, rapscallion, nimble art gourmand, and colorful sleuth. Her reason for being in time is Ernst Blazer, a painter, lord of hues and ripples, and a container of the fragrance of memory. Not since the meeting of the poet Rainier Maria Rilke and the artist Auguste Rodin (while Rilke wrote The Notebooks of Malte Laurids Brigge, an autofiction like DOVELION) has there been a melding of true artistic minds. As well, philosophers will be entranced by this book that hearkens Martin Heidegger’s magnum opus, Sein und Zeit (Being and Time). Eileen R. Tabios has achieved a Gabriel García Márquez with the emotion and aplomb of Laura Esquivel. Recommend for all fine libraries and personal collections.
—Nick Carbó, author of the poetry collections Andalusian Dawn, Secret Asian Man (winner of an Asian American Writers Workshop’s Readers’ Choice Award), and El Grupo McDonald’s

DOVELION: A Fairy Tale for Our Times is Eileen R. Tabios’ mythic imagination enlivened! History marks bodies and cultures, making up stories deemed worthy and purposeful by the powerful until the Storyteller/Poet reveals the secrets and shadows lurking beneath power’s machinations. The figure of an indigenous community and spiritual leader known as “Baybay”—inspired by the Philippine Babaylan—emerges as the Medicine that calms the heart’s longings and reweaves the fragments of diasporic displacements. Eileen R. Tabios welcomes us into the world of “Kapwa-time” where the past, present, and future comingle and entangle with our own capacity to believe in the potency of myth-telling. Kapwa-time and mythic imagination form a descent into the underworld, or a psychic and archeological exploration into the subconscious; it’s notable that the indigenous Filipino concept of ‘Loob’ has internal and external dimensions. If this descent is done well and blessed by the deities, it becomes manifest in the Beauty of the novel’s form—such is Eileen R. Tabios’ accomplishment with DOVELION. As a reader going deep into Kapwa-time, I find my inner compass and this compass floods my life like the light of a thousand suns.
—Leny Mendoza Strobel, Founder of the Center for Babaylan Studies, Author of Coming Full Circle: The Process of Decolonization Among Post-1965 Filipino Americans and Editor of Babaylan: Filipinos and the Call of the Indigenous

This novel swirls with philosophies: historic, societal, militaristic, aesthetic, tribal . . . But its essence is a love story.

… Through Elena, Tabios’ philosophy is very far ranging. From the minor worth of a name: “Amy? So benign. Not sufficiently fraught with various significances.” (92) To power: “When one is powered only by power, joy becomes irrelevant.” (143) “To be poor is inherently to receive cruelty.” (216) And a clever play on poetic parentheses about misogyny: “Not perceived or articulated such that it often lapses into the parenthetical.” (221) A closing irony: “Ignoring reason is often a luxury for the privileged.” (191)
—Ray Greenblatt, poet, editor and critic for North of Oxford, May 2021 (review available HERE)

True to most fairy tales, the novel opens with the traditional phrase “once upon a time” but there is nothing traditional about this novel which is at once inventive and experimental. How many times, for example, can a writer get away with describing a young woman approaching a threshold and pressing a button on an intercom to gain entry to Apartment 3J? The answer is again and again and again. Each time the reader is given a little bit more information and each time the reader is kept in suspense. There is something portentous, if not symbolic, about crossing a threshold. Tabios takes this to new heights by exploring the threshold of pain: how much a human being can withstand pain through living with actions that can have long-lasting repercussions. The repetitive, formulaic patterns seen in Part I recur in Part II “leaving darkness for light” and in other chapters where “a dictator made me an orphan. To be an orphan is to be unsure” and in Part III “Once upon a time I woke up and I was old…” These mantras punctuate multiple arrivals. The use of repetition applied in different forms throughout the novel is akin to the musical equivalent of a set of variations on a theme….

Helpful, informative notes are supplied at the end because “all stories bear appendices, notes, footnotes and postscripts” and this one is no exception. Cleverly put together, this novel will appeal to all those who are interested in autofiction and its future as a literary genre.
—Neil Leadbeater, poet/fictionist for The Halo-Halo Review, April 2021 (review available HERE)

“What To Read When You Want To Celebrate APIA Heritage Month,” The Editors of RUMPUS, May 14, 2021

DOVELION is a novel whose native language is poetry.

One of many posters created from my favorite lines (more posters are available HERE): 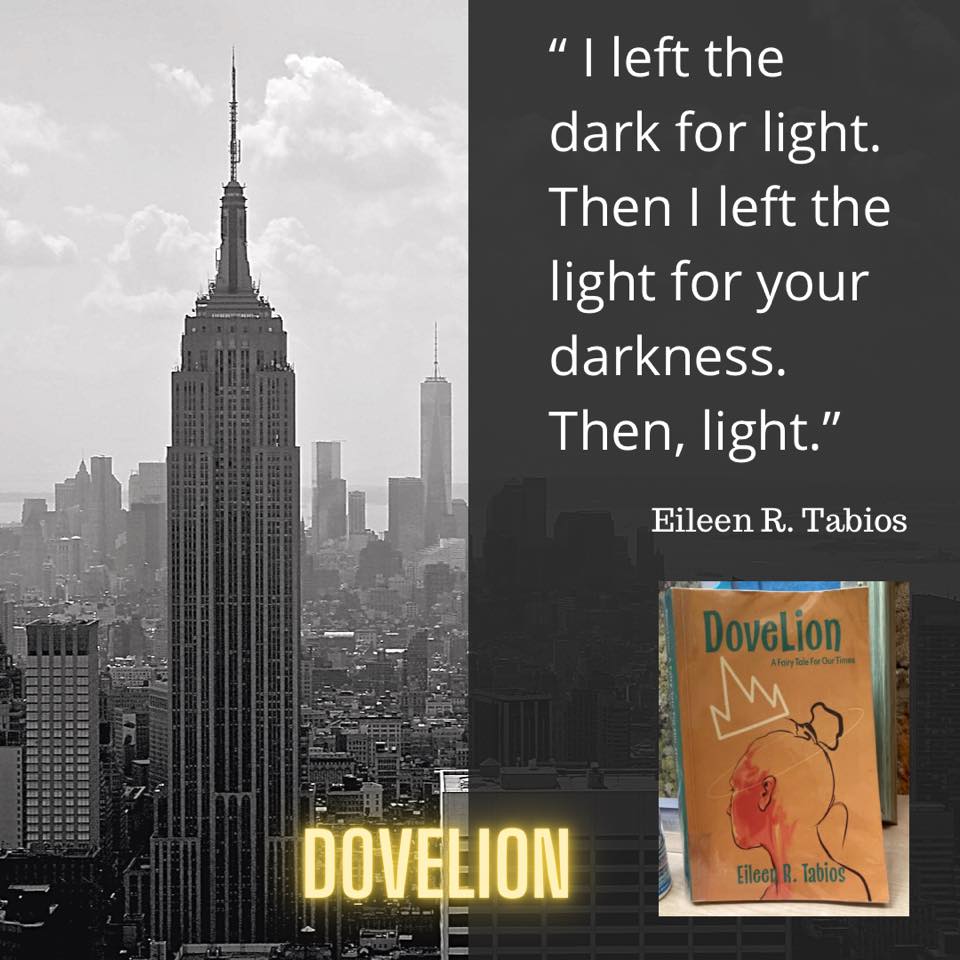 So here we have the idea of looking at paintings but not “normatively” looking at the center of canvas, not at what’s framed. Instead, we look at the edges of paintings. There’s something in the POC zeitgeist, too: while I’ve long considered the significance of operating in the “margins,” poet-artist Jean Vengua recently made some paintings for me that had very wide edges as she’d wanted to paint on those edges, too, in addition to the center, front areas of the canvases. There are alternate worlds in the margins or in spaces that don’t get the most attention but, quite often, as much—sometimes more—honesty and truth await there.

The notion of dominant narratives arises, too, in how history is written. As has been written in U.S. history textbooks, the Philippine-American War has been called a “rebellion” by U.S. historians. As you know, that war was not a rebellion but a battle against U.S. invasion of an independent country (the Philippines was then independent as it had just successfully overthrown Spanish rule). So Filipinos were battling an invasion by the U.S., not rebelling against a legitimate U.S. rule. I hope a novel like DOVELION makes affected readers cautious of false narratives, and encourages more questioning rather than unthinking acceptance of various matters.
—from “Exchange with Eileen R. Tabios on DOVELION,” Dichtung Yammer, May 1, 2021

Into the Fabulous Book: Wow! I ventured in last night (hard to stop reading, but sleep beckoned!), and it is remarkable already. I love what [Eileen is] doing. So thrilled with this!
—Sheila Murphy, poet & visual artist

An adult fairy tale read for our times!
—Elsa Valdimiano, poet/writer & author of We Are No Longer Babaylan

It articulates poetics! DoveLion brings together the author’s interconnected political/humanitarian/aesthetic concerns (the history of U.S. geopolitical incursions, orphans, Philippine colonization and neo-colonial history, indigenous FilipinX philosophy, poetry as a way of life, abstract painting as not really abstract) in a fully integrated way. It has an intricate plot with plenty of surprises, deftly posed. The liberal use of flashback and flashforward makes the book an interesting challenge for readers. Some readers will love its overt and persistent didacticism; others won’t. It was ok with me, though there could have been a bit less of it. It’s especially noteworthy that the character Elena’s father turns out to be a CIA agent killed by another agent—it reminds me of U.S. support for the Taliban in the Reagan era giving rise to the Taliban as a major threat against U.S. security.
—Thomas Fink, poet-painter-scholar 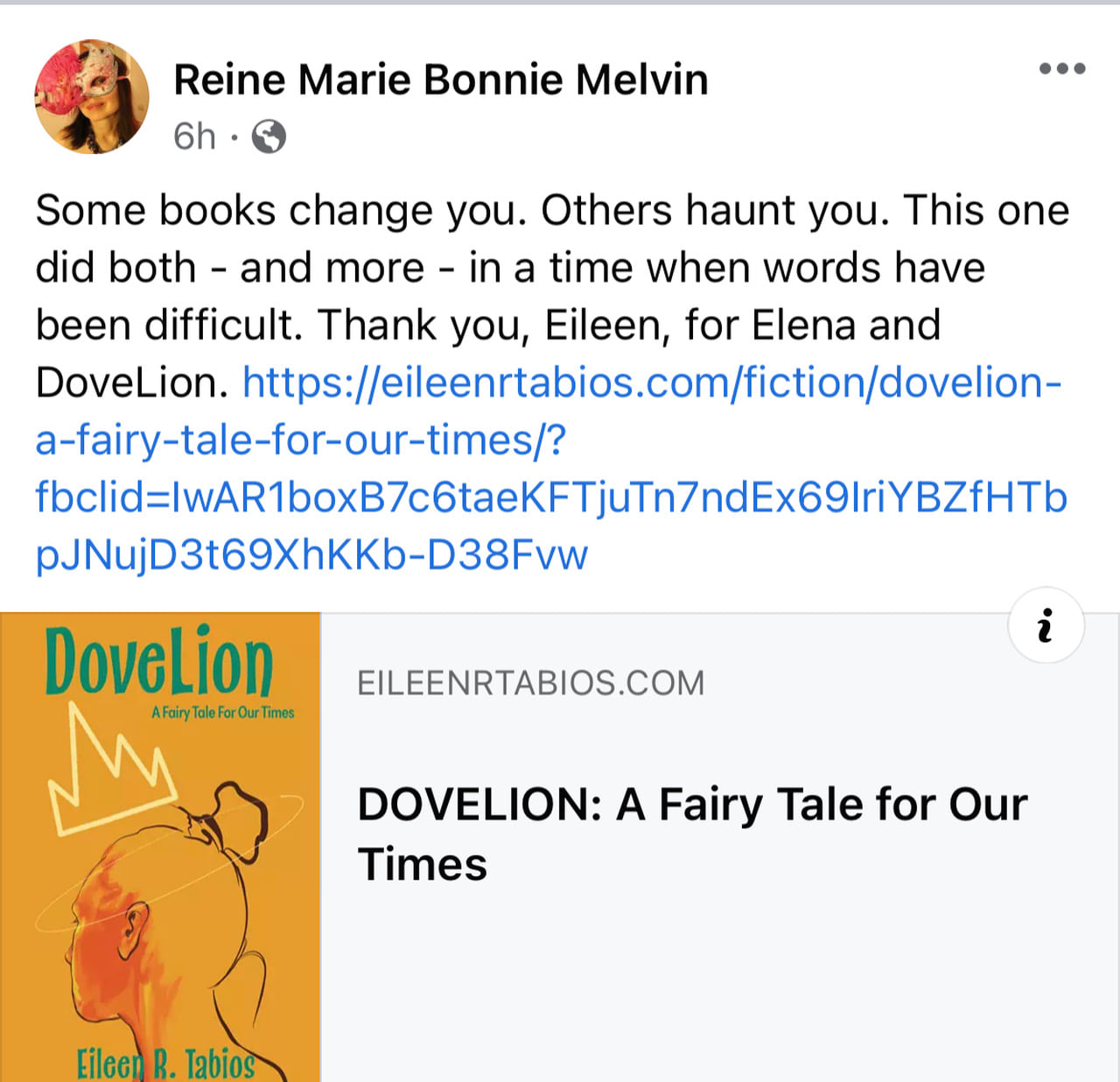 POEMS-FOR-ALL, long-time publisher of miniature books, has created a mini version from an excerpt in DOVELION entitled April 9 in DoveLion (2021). Size: 1-5/8″ x 2″ 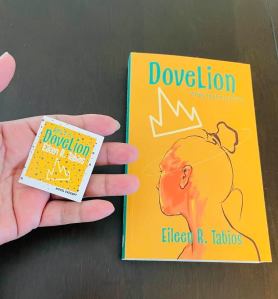 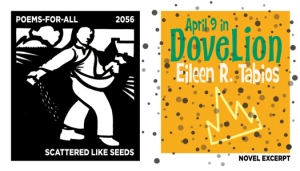 The novel contains one Appendix and it is the long poem “The Return of DoveLion.” Eileen Tabios read most of the poem for a Joel Chace book launch sponsored by Unlikely Books; you can listen HERE (she is the first reader). The text also is available online through its publisher Erotoplasty 7 (Editor Colin Lee Marshall). 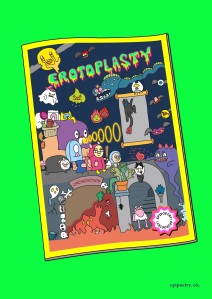 Click HERE (Pages 124-130) to read the poem which was written by the novel’s primary protagonist, Elena. Here also are some excerpted lines:

7: I forgot there is a country somewhere on the opposite of where I stand on this earth, a country whose scents stubbornly perfume my dreams.

46: I forgot discovering the limited utility of calm seas.

124: I forgot aching for fiction that would not chasten my days.

141: I forgot addiction to Duende for its intimacy with savagery.

142: I forgot greeting mornings as an exposed nerve.

68: I forgot love stutters over a lifetime.

—from “The Return of DoveLion”

Beyond Life Sentences (Anvil, Philippines, 1998) which is Eileen’s first book;

HIRAETH: Tercets From the Last Archipelago (The Knives, Forks and Spoons Press, 2018); 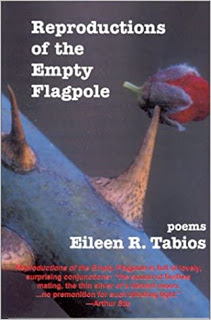 The essay also features two Rapunzel poems first published in Marsh Hawk’s Reproductions of the Empty Flagpole and, according to a review by Neil Leadbeater, a supporting element to DOVELION being considered a fairy tale.

DoveLion was presented by Eileen R. Tabios—with Leny Mendoza Strobel, Lizae Reyes, Mila Anguluan, and Matt Manalo—during the 2020 Conference of The Society of Indigenous and Ancestral Wisdom and Healing. More information HERE about the Nov. 22, 2020 event: 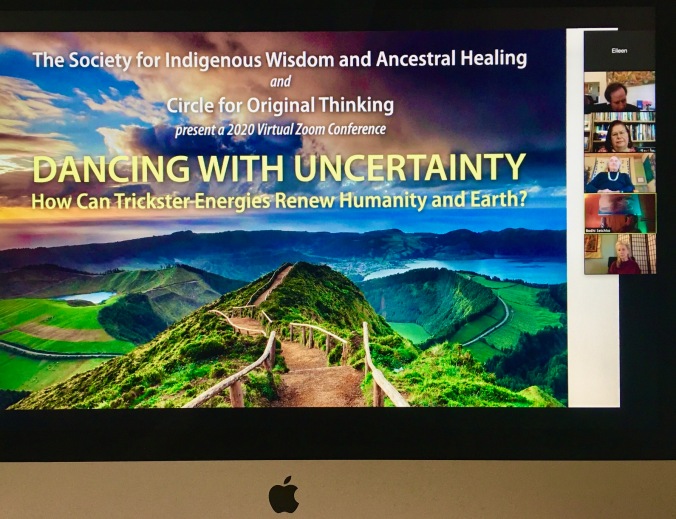 Excerpts from old drafts of the novel were refashioned into a short story entitled “Aesthetics in the Dictator’s Aftermath,” Pagsulat Sa Mga Bulaklak / When Writing For Flowers, June 1, 2019

“Returning to my Beloved Margins: How I Got My Novel Published,” Otoliths, Issue 59, Southern Spring 2020 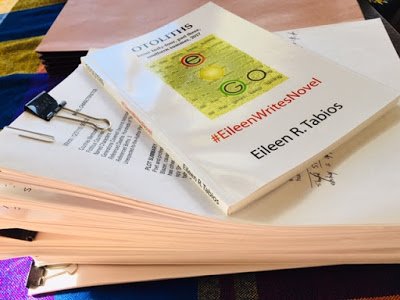