Tapped by Sundress Publications for its “Best Dressed” / The Wardrobe series. A list of its poem-picks to highlight from INVENT(ST)ORY is available HERE.

In the United States, the catalog or list poem first made its appearance in the work of Walt Whitman, who himself was evidently influenced by Old Testament verse-lists. Formally and thematically, Whitman was a democratizing force….Like Whitman, [Eileen] Tabios has prioritized democratic impulses in the conscious shaping and articulation of her poetics. However, while Whitman stands as a figure claiming centrality for his American-ness and for an idea of “America,” Tabios’ postcolonial—or … “transcolonial”—subjectivity has done much to shape her poetics.

…The push/pull of juxtaposed elements in the catalog poems of Tabios’ Invent(st)ory continually raise questions about the slippery characterization of what is valuable or worthless, what is coherent or fragmented or both, what is to be deemed relevant or irrelevant, what is given to accretion and/or dispersal, what is clear or opaque, what is (politically) inclusive or exclusive, and what is communitarian or atomizing. Yes, her inventories tell stories—complicated ones, full of allusive and overall signifying power—and her stories partake of the processes of inventory.
—Thomas Fink (Full text of Introduction at The Halo-Halo Review)

Invent[st]ory is evidence of the magnetic prowess of Eileen R. Tabios. Her fluency in the catalogue poem transforms the generative function often associated with this mode into profound poetic resonance:

“I forgot belting my jeans with a used halo.
I forgot my feet mischievously walking two inches above ground.
I forgot a girl shrieking as her swing soared towards a boiling sky.”

The sense of plenitude in this work reveals a lifescape replete with variations on the infinite themes we learn anew. There are no boundaries beyond the chant-like intonation that engenders spiritual potency. Eileen Tabios transforms raw material by way of an innately glowing sense of wonder at the richness of this universe.
—Sheila E. Murphy

There are so many paths thru the enchanted forest that is Eileen Tabios’ oeuvre that no one can possibly take them all in one lifetime. So it is with something approaching glee that I find here a completely unexpected one: a mid-career “selected” constructed around her recurring use of the list / catalogue-form. Did I say the list-form? No, pluralize that, and prepare to encounter an entire ecosystem of catalogues and lists. And don’t for a minute let this lead you to think that this is a book of “weak conceptualism”, not that there’s anything wrong with weakness (in the sense of an antifoundationalism), nor with conceptualism, because there’s not. Think rather that you are encountering poetry, sans qualifiers; prepare to read; and (quoting Perec quoting Verne) “Look with all your eyes, look”. This is the real stuff.
—John Bloomberg-Rissman

The Poet’s Ekphrastic Take on the Cover:

Lines. Seas and oceans contain so many, diverse lines creating so many, diverse patterns. As does the sky. Between them another line: the horizon. Not really a line between the two — it’s just the way Baudelaire (I think it was him) once observed: the eye psychologically needs contrast to help manage what it sees and that, absent such contrast, as Anne Truitt (I think it was her) once observed, the eye might find it difficult to grasp/grapple infinity.

Lists. Lines. The lines of lists. The many, diverse lives of list poems. Thus do we come to the cover–my thanks to the book designer, Elizabeth Murphy.

…works from Tabios’s early years, beginning with 1996, where, in the very first poem, I read the line “your finger trailing the ragged seam of my stretchmark.” Having read Tabios’s more political work, stemming from issues of Filipino nationalism and diaspora, the condition of the orphan, and gender transformation, among other elevated topics, I found this line a reminder that all art, no matter its purpose, must be personal and evocative. It must paint with words—words chosen with the utmost care and discernment.

An early experimentation of Tabios’s that defines her relationship to the reader that I found fascinating is from 2003, when she published There, Where the Pages Would End, which is a series of “footnote poems.” The idea was to have one of the poems at the bottom of an otherwise blank page so that the reader could create the story that would generate the footnote. I encourage the reader to do so. For writing teachers, or writers looking for exercises to sharpen their skills, this is powerful practice. In general, there is a considerable portion of Invent[st]ory that could be used to structure a series of workshops or to engage a class of writers with the endless possibilities for our craft that are left beyond the margins when we teach a static poem on the page and ask them to merely imitate.
—Joey Madia, New Mystics Reviews, Nov. 17, 2015

Eileen Tabios is a master of words but more important than that she is a purveyor of experiences and emotions and reactions to the world (her world/our world) that are unmatched. It is impossible to review this magnum opus, so rich in character and the passage of time and continuing sophistication and maturity. Best to simply realize that Eileen is capable of using the English language in ways few have ever attempted or could mimic.
—Grady Harp, Amazon Hall of Fame Reviewer, April 1, 2016

In fact, speaking generally about Tabios’ work, this is one of the things I like best about it…. I’m always left with a bit of a mystery. Which I think is thought and emotion producing. Which is great.
—John Bloomberg-Rissman, The Halo-Halo Review, September 2015

The prolific Mozart once boasted (to his sister, no less) of writing music “as a sow piddles.” I’m not sure St. Helena poet Eileen R. Tabios would resort to such coarse imagery to describe her own creative process, but she sure churns out volumes of poetry with astounding ease and regularity. Her latest (at least as of its publication on Sept. 1) is “Invent[st]ory,” and the punning title is a clue that it’s a collection of “catalog” or “list” poems Eileen has written since 1996. My favorite poem in it was “The Erotic Life of Art: A Séance with William Carlos Williams,” which draws upon anecdotes from the lives of great artists in a way that reminded me of David Markson’s late novels. I wonder if Eileen has read Markson’s moving, profoundly sad “Wittgenstein’s Mistress” – if not, I humbly recommend it to her, and to the rest of you as well.
—St. Helena Star, Sept. 12, 2015

Eileen Tabios brings in her work an example of attention. She remains mindful of the situation she inhabits, politically, socially, and culturally. Her work is not something outside her life. I won’t say it is her life, but I will say it is the mechanism by which she receives and shares the world. She writes mindful of the details. We all meet by those very details.
—Allen Bramhall, Mandala’s Web, Sept. 12, 2015

Ms Tabios has put together a very handsome collection of her work spanning from [1996] to 2015. “Drink nothing but the liquid from a pigeon’s egg for 40 days.” That is one of the many footnotes you will find in this fascinating book…
—Chris Mansel, The Daily Art Source, Oct. 29, 2015

Titles, like covers, seek our attention. They invite speculation and provide clues as to the nature of the material that lies within. The full title of this volume is Selected Catalog Poems & New (1996-2015) INVENT[ST]ORY. The dynamic inherent in the title, which holds together two opposing fields, the concept of the inventory and the concept of the story, is the force that fuels its creativity.

This substantial volme of work brings together selections from several previous publications written over the last twenty years together with some new and uncollected work. A fine introduction by Thomas Fink, who made the selection, places the work in context and provides a useful and informative guide to readers who may be encountering the work of this poet for the first time.

For a while now, Tabios has been interested in the concept of the list poem – that is to say, poems composed of lists. Nowhere is this more apparent than in her sequence of poems about the content of the Balikbayan Box (taken from her book Post Bling Bling, 2005) and the poem sequence called Garbage: A True Story. The former reveals her very real engagement with problems and perspectives relating to cultural identity and expatriatism and the latter with environmental issues and the problems of living in a throw-away society. In other words, these are not just lists recorded for the sake of it, but revealing commentaries on subjects that go far deeper than the surface text. Tabios‘ engagement with the public is of particular interest in these two sequences. E-mails received from individuals responding to her texts and calls for information form an integral part of her work and lend a degree of objectivity and authenticity to the overall content.
—Neil Leadbeater, The Halo-Halo Review Mangozine #2, February 2016

Leafing through INVENT[ST]ORY, I am awed by her inventiveness, prodigious energy, humor, and surrealist exuberance.
—E. San Juan

Wow, you’ve been a busy one. I believe that no matter how busy one is there’s always time for the thing you love, no matter what that is. Tom (Fink) did a great job with the intro for the Selected. He’s got your poetic number down to perfection, quite elucidating and informative. The diversity of work is quite amazing: you are the consummate artist in every genre you undertake. And please believe me I’m not feeding you a line on this one, I truly mean it. When I think of you and your poetry I am reminded of a quote from Gustav Mahler: “The symphony must be like the whole world, it must embrace everything”; for “symphony” insert the word “poet” and/or “poetry.”
—Ric Carfagna 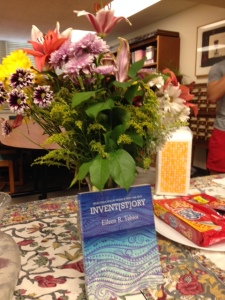 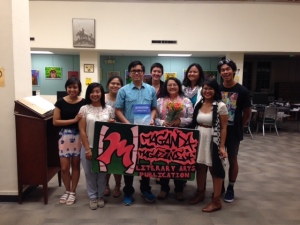 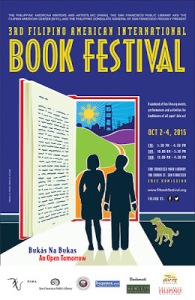 BOOK PARTICIPANT IN FUNDRAISER TO SAVE A SCHOOL:

Some manuscript-in-progress notes are available at