A free .pdf read is available at the publisher’s site HERE.

A Print Copy is available for $5.00 at the publisher’s LULU account HERE.

REVIEW BY M. EARL SMITH AT THE HALO-HALO REVIEW

EXCERPT: There’s an incredible amount of power that Tabios’s minimalist stylings give to her work (a fact that she, tongue-in-cheek, acknowledges in the epigraph of her poem “Talk-Story Poem, but I digress), especially in a form of art that could be forgiven for waxing, well, poetic, given the societal circumstances that surround its composition. Yet, in this volume, less is more. For example, in one of her hay(na)ku’s, she offers “becoming plural through/re- _____, thus/community” only to give the reader a short, yet equally poignant list of words they could make: “revelation, redress, rebellion, red, restoration,/renaissance, redrawing, review, re_____”. Such a list inspires various acts of rebellion, wither it be by Catholics, lawyers, colonists, Communists, Protestants, artists, architects, or writers. In fact, one of the things that delights the reader about Tabios’s work is the ability to relate her words to their struggle, regardless of where they may or may not fit in the melting pot.

EXCERPT FROM WILL WOOLFITT’S INTERVIEW ABOUT IMMIGRANT AT SPEAKING OF MARVELS, April 11, 2017:

Could you share with us a representative or pivotal poem (or excerpt) from your chapbook? Perhaps something that introduces the work of the chapbook, or that invites the reader into the world of the chapbook?

I intended, and hopefully it succeeds, that the chap’s first poem presents such an invitation. In part, this reflects the nature of the chap—because of its slimness, I thought there’d be more chance (than in a thicker, full-length book) that a reader might read it chronologically from the first to the last page. So I wanted the opening poem, “South of ___ (fill in the blank)” to be an invitation; indeed, it ends with

“… hold my hand as the day unfolds.

To hold my hand
simply offer an uplifted palm
and trust in my response.”

Why did you choose this poem (or excerpt)?

I chose it, and the three poems following it, because they are from my first (and now-out-of-print) chap After The Egyptians Determined The Shape of the World is a Circle which was issued in 1996. I wanted to present poems from the beginning of my writing life to the present (the chap ends with a recent poem). By spanning the entirety of my writing life, I wanted that span to mirror the “life” of the collection’s protagonist, who—as noted in the title—is an immigrant. I tinker a lot with subverting the form of (auto)biography and this chap’s persona is an immigrant poet who, as it turns out, not just writes poems but contributes to poetry by enlarging its expanse, specifically by inventing a new poetry form. That poetry form is called “hay(na)ku” and its core is a tercet with the first line being one word, the second line being two words, and the third line being three words. So the poet’s contribution is an example of the theme of how immigrants contribute to the “land” where they emigrate—an important reminder given the current heightened attacks on immigrants and refugees.

Will Woolfitt’s Interview is one of Speaking of Marvels‘ Top Twelve Reads for 2017.

“Dear Mama” from IMMIGRANT was part of the Mother’s Day Service at the United Methodist Church, Saint Helena, CA on May 14, 2017. 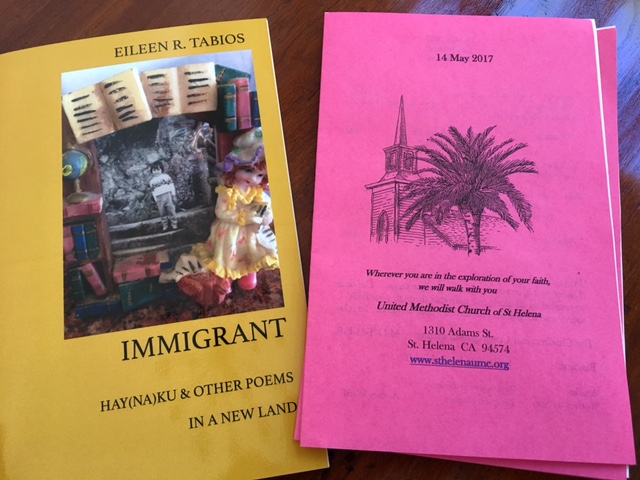 You can see details and more photos HERE. 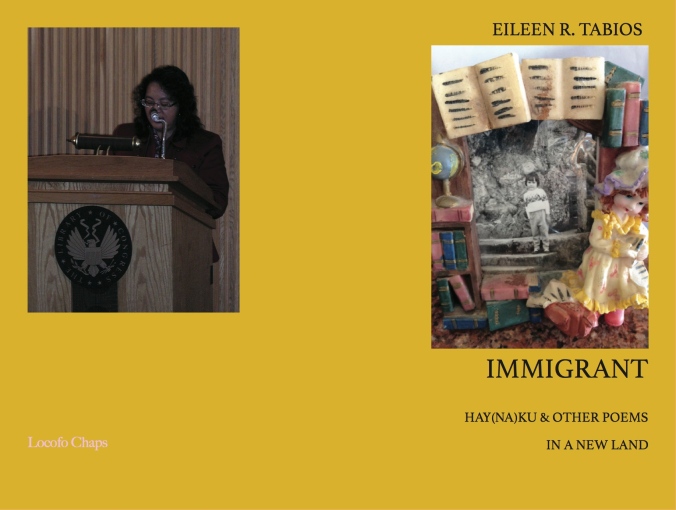